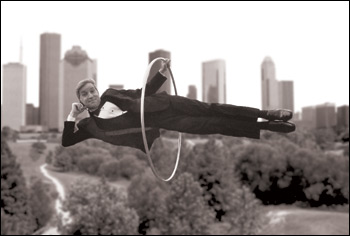 Two years after he learned his first magic trick, Curt Miller had business cards printed identifying him as a magician for hire. Of course, at the time, he was a year removed from elementary school.

“I started as a kid, as most magicians do, about the age of 11. I started originally just to impress my friends, then realized that I was onto something special and soon found myself performing all over the Midwest. I had business cards by the time I was 13,” said Miller, a Willowbend resident.

More than 25 years later, Miller still owns business cards identifying him as a magician. But his shows today are far more lucrative than those he performed as a teen growing up in Fort Wayne, Ind. Nearly half the performances Miller stages each year are “marketing magic” shows, presentations made at trade shows or corporate seminars combining magic, marketing and motivational speaking.

To deliver his best effort, Miller must saw himself in half, so to speak. He’s part-magician, employing everything from “big illusions” to close-up magic, to entertain audiences. He’s also part-pitchman, touting the company line or the company’s product line, depending on the gig.

While it’s a profitable endeavor, it’s one Miller wasn’t entirely comfortable with initially.

“It was real difficult at first, because I came from a background of sheer entertainment and trying to make people laugh. In the trade show situation, you want them to have fun, but it’s more important to promote the company and get its message across,” he said. “The fine line is trying to find a balance between communicating the message, but not being too much of a salesman.”

A glance at the client list Miller has assembled on his Web site, curtmiller.com, suggests he’s found such balance. He’s performed for or represented firms as large as American Express and the Coca Cola Company. Other clients include Continental Airlines, Reliant Energy and Shell Oil.

Miller said the corporate slant his act has taken is a recent development. He arrived in Houston in 1982 to study at the University of Houston. To pay his tuition, he took a job performing close-up magic — his favorite type — which focuses on sleight of hand at a restaurant called Circus. Later, he became a featured performer at Magic Island.

That job, which he calls his “internship,” boosted Miller’s career in more ways than one. He said he performed as many as 10 shows a night for five years, practicing his craft and honing the stage presence he learned in drama and communications courses at UH.

“Once I started at Magic Island, its clientele is mostly corporate. So, I really started meeting a lot of people asking me if I could incorporate their company and its marketing materials into a show,” he said. “Companies are always trying to look for a unique way to present themselves, especially at trade shows. Anything to stand out from the crowd.”

As a fan and peer, Miller said he enjoys Lance Burton and David Blaine. When he began performing illusions, the late Doug Henning was a favorite.

“The first illusion I learned was cutting a hole in a handkerchief and putting it back together, which my mother didn’t appreciate. We went through a lot of handkerchiefs,” Miller said.

Interest in learning magic is at a low, Miller said. However, he said he’s seen more and more magicians including marketing magic on their resumes. As recently as last month, Florida-based Magic2motivate held a training seminar, inviting magicians across the country to learn to unite magic and marketing. Trade show research firm Exhibits Surveys, Inc., has cited magic as the second-most effective means to garner attention at expositions, behind product demonstration.

“When they hire me, I say, `Give me the most important things you want to communicate to this group,’ and that’s what I focus on,” Miller said. He said his biggest illusion isn’t levitating above a crowd or making a chief executive officer vanish into thin air. It’s actually creating the illusion that he is something he really isn’t.

“I try to learn as much as I can about the company before I go into it because, once I get in that trade show environment, I feel I’m a representative of that company,” he said. “The biggest compliment I can get is if someone comes up and asks me how long I’ve been working for that company.”